by Michelle Marus
in Random World
0

The C7 is expected to be the last front-engine Corvette in light of the new C8 Corvette mid-engine model. When the C8 debuted, countless enthusiasts sought out purchase the previous C7 Corvette at the right price. This was true for a number of reasons, including the fact that many did not immediately welcome the Corvette successor.

Those who did revel in the new model began putting their C7s up for sale; so, it was a win-win. If you own or are looking to buy a C7, we have listed some of the top exhaust systems below to help you take its performance to the next level. While the Corvette is perfectly capable and impressive right off the factor lot, we as enthusiasts know that there is always room for improvement and ways to make the car ours. 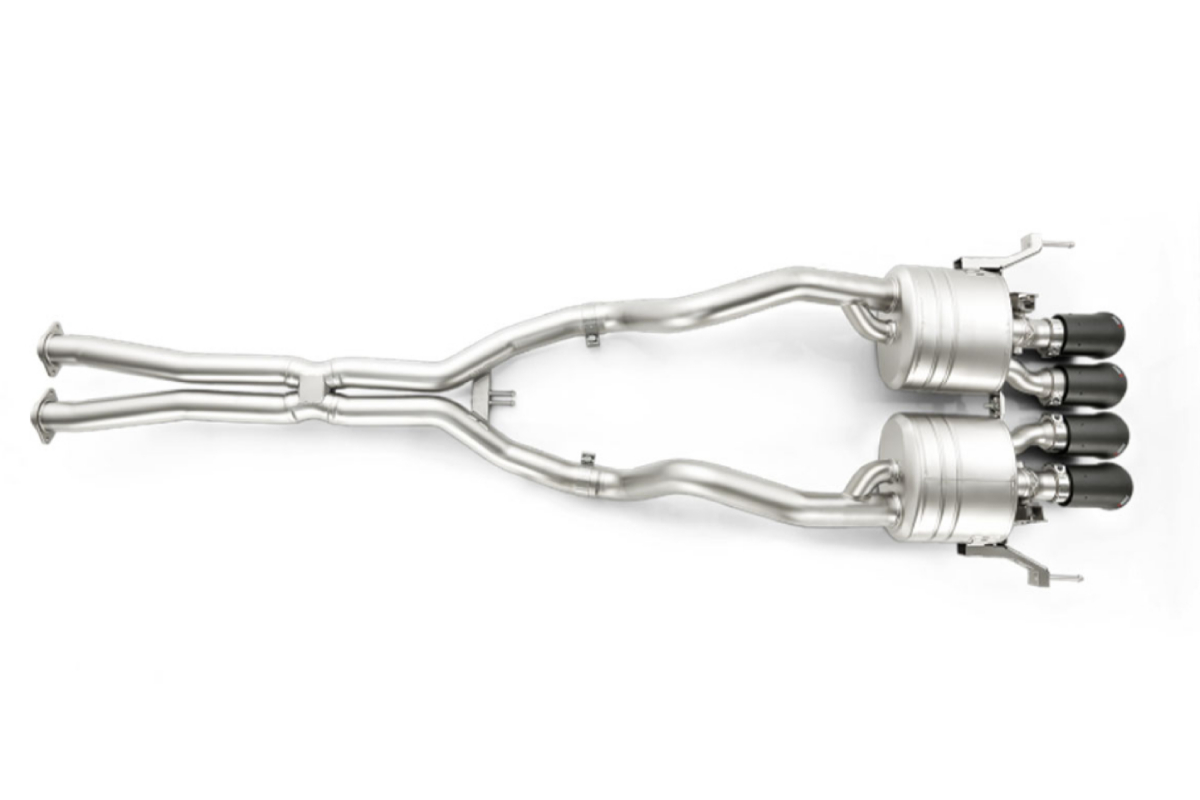 If you are looking for the very best that money can buy, look no further than Akrapovic’s Corvette exhaust systems. The Slovenian manufacturer is known for being one of the best and taking exhaust notes to the next level. Its team of NVH (noise, vibration, and harshness) engineers work tirelessly to ensure every tube, muffler, and tailpipe are carefully tuned to each specific vehicle. The exhaust featured here is the Akrapovic Evolution Line system for the C7 Corvette.

The Akrapovic Evolution Line System for the C7 Corvette takes exhaust tuning to new heights. It features mufflers and link pipes constructed from high-grade titanium to drastically reduce the overall weight. The Evolution Line system delivers more power, lowers back pressure, improves throttle response, and increases torque figures. Each pipe is CAD designed and flow tested for maximum horsepower and torque gains. The Akrapovic exhaust system is specifically engineered to maintain the valve regulation of the factory NPP system and is perfectly matched to operate with the five standard GM modes—Weather, Eco, Tour, Sport, and Track. This produces an even greater range of options for drivers to experience the amazing sound potential of the Corvette C7.

The Evolution Line system, with a new X-pipe, delivers even greater performance when compared to the Slip-On Line system, and provides a pure and tantalizing race-inspired soundtrack paired with the enhanced sound traits of the Corvette C7’s V8 engine, without any drone to boot. Four large-diameter tailpipes with titanium inners finish off the look, making it stand out as a true art piece. You will not find the Akrapovic Evolution Line System on every C7 on the block. It’s for the more discerning buyers. 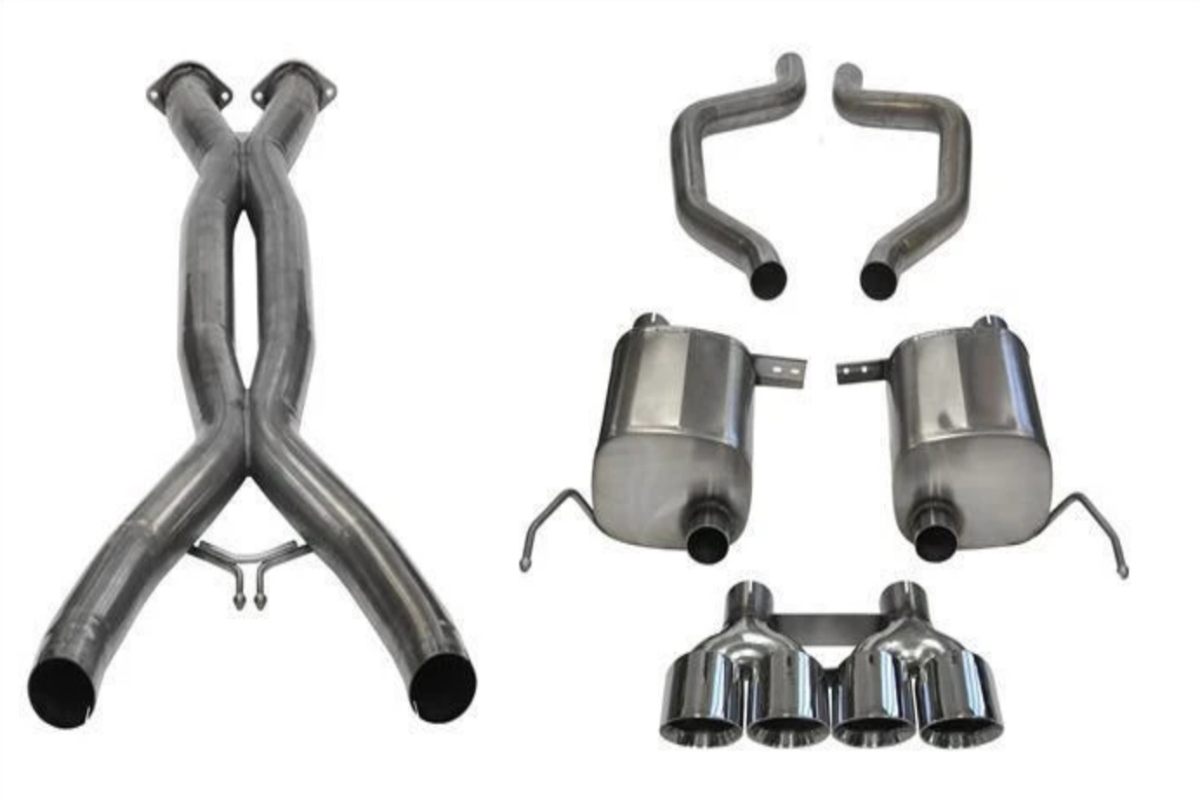 With the Corsa Xtreme catback exhaust system, you can experience all that your C7 Corvette has to offer. It’s aggressive and loud with Corsa’s patented no-drone Reflective Sound Cancellation (RSC) technology. It is engineered to target and get rid of unwanted frequencies that cause annoying interior resonance. The brand’s RSC technology is purposely designed to deliver a mean soundtrack that turns heads under acceleration with no drone at cruising speeds.

Each Corsa exhaust system is engineered and custom-tailored to each specific vehicle application in order to maximize performance and deliver a drone-free cabin. The Corsa Xtreme boasts everything that customers have come to expect from the brand – good looks, performance gains, and an incredible soundtrack. The straight-through, unrestricted design reduces back pressure, improves engine efficiency, and thus increases horsepower and torque.

The Xtreme system is craftiest using only the highest-grade stainless steel and designed for maximum airflow. It features massive 4.5-inch quad tips that are over a half-inch larger than the stock ones. They are available in 304 Dual Walled Stainless Steel in either polished or PVD black finishes. The system pictured above includes the Corsa Double Helix X-Pipe paired with the Corsa Xtreme axle-back. 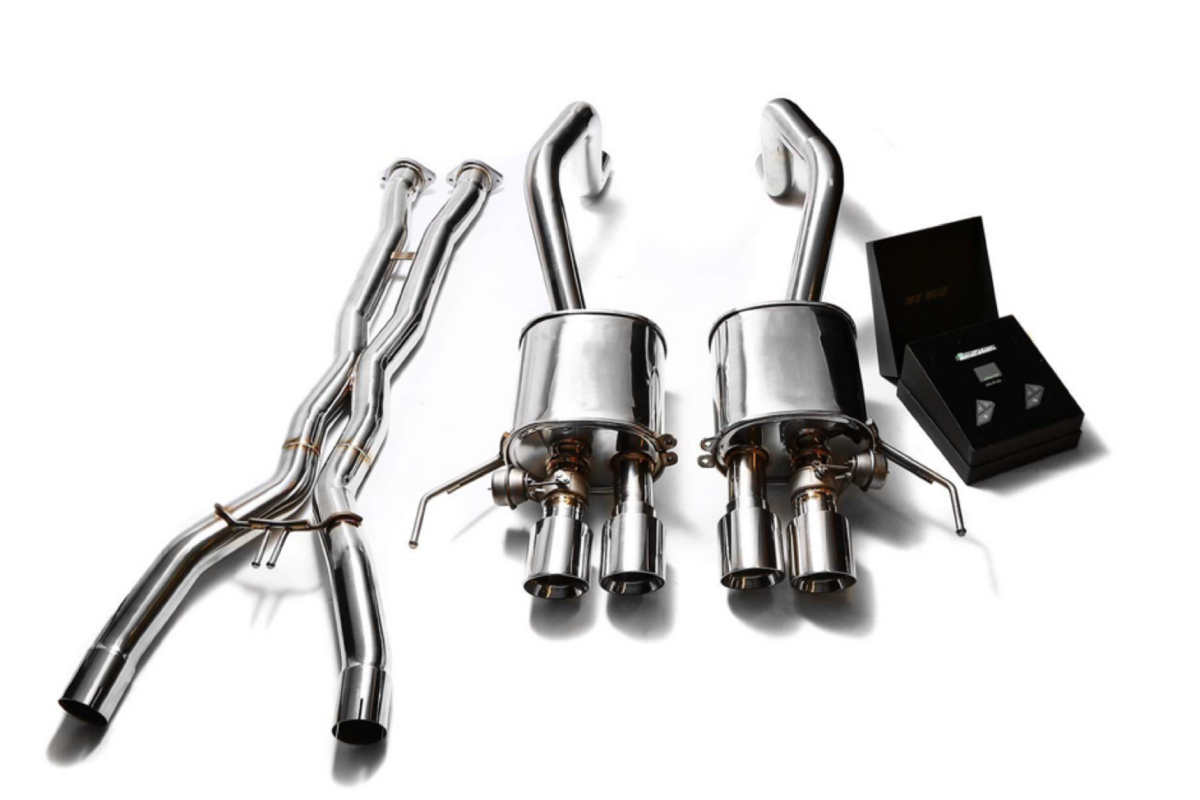 The Armytrix Valvetronic exhaust system is one of the brand’s most prominent selling features and one that helped shift the industry toward adopting similar technology. When you purchase an Armytrix Valvetronic system for your Corvette C7, you are arming yourself with revolutionary technology for a smarter and more exciting driving experience.

The main point behind the Valvetronic system is to give drivers control over how loud they want their car to be. It allows you to switch between quiet and loud modes with just the push of a button via the included remote or through a smartphone app. It works by tapping into a vacuum source on your car’s engine and connecting it to the control module. By simply pressing a button, you are communicating with the vehicle’s OBDII module via Bluetooth. The module, in turn, tells the exhaust valve to permit the engine vacuum to open or close the exhaust valve. As if that wasn’t cool enough, you can also set the exhaust valve module to an automatic mode that will open and close the valve based on a preset RPM range or throttle position.

Apart from getting an incredible exhaust note with the open Valvetronic system, your car will also be treated to some added power. Depending on the car, mods, and tune at play, the open valve will also allow the exhaust gas to flow more freely, as it does not have to pass through any muffler. Armytrix has tailored each of its exhaust systems to carry and deliver the maximum payload. The brand’s streamlined systems are lighter, ridding your car of the factory deadweight and offering a more unrestrictive flow as aforementioned. The improved efficiency consequently plays a significant role in horsepower and torque improvements with more liberated performance. 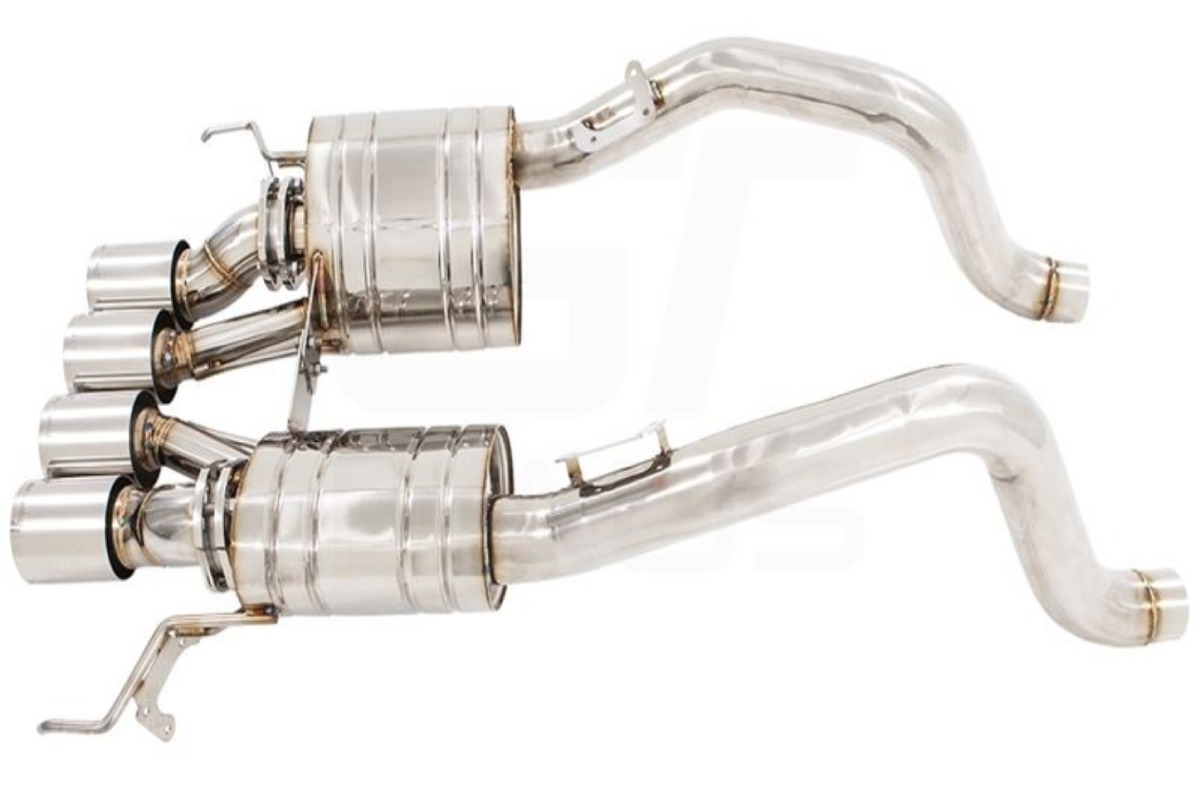 The Meisterschaft GTS (Ultimate Performance) system for the C7 Corvette is engineered for those who want a no-nonsense exhaust that will perform exceptionally and produce an incredible sound at all times. You will turn heads everywhere you go with a tantalizing exhaust note that is second to none. Meisterschaft has achieved the pinnacle of performance and quality with some of the world’s finest exhaust systems. This is one of them.

With a better flowing exhaust, you will also experience faster throttle response and more power overall. That added power along with the much louder and aggressive exhaust tone will take your C7 Corvette to heights you’ve never imagined. The polished tips add a classy finish to your Corvette with Meisterschaft’s signature vertical blade in each one. Exhaust tip options include heat-baked dry carbon tips, shadow black chrome tips, or glossy/matte black tips. 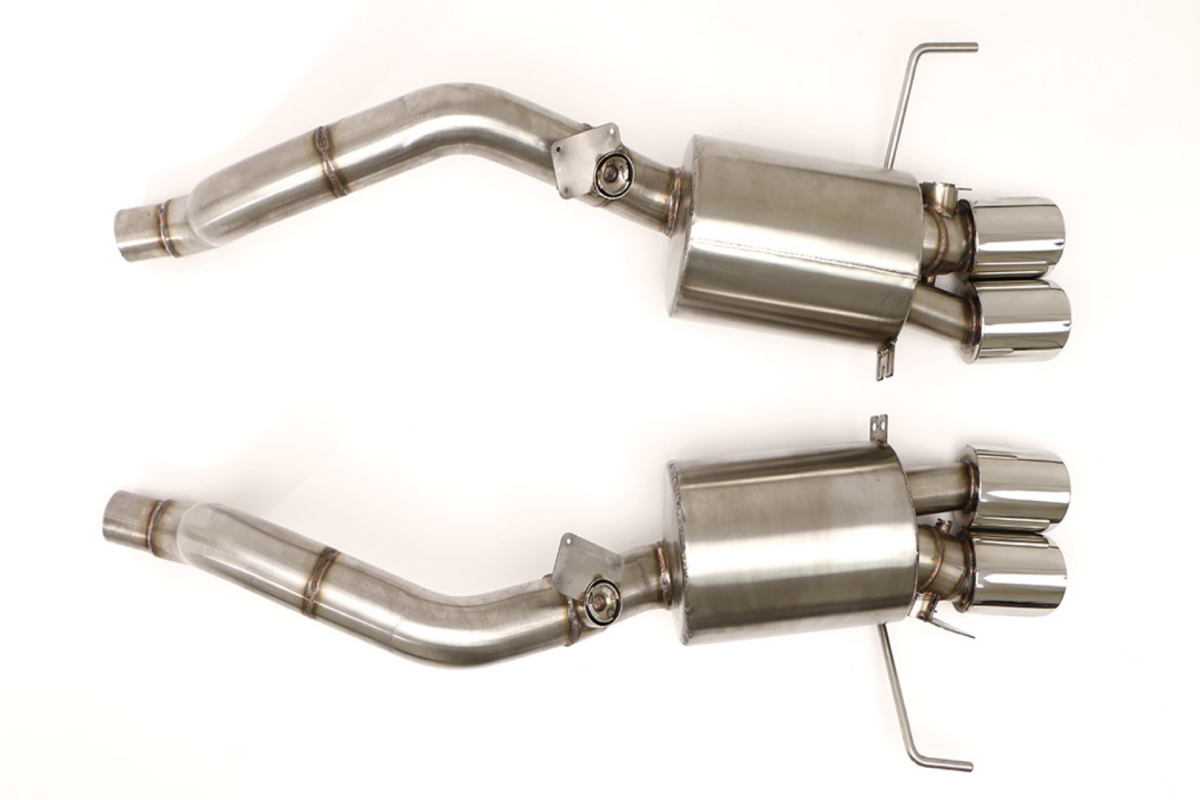 B&B (Billy Boat) Exhaust has combined the greatest traits of its aggressive Bullet exhaust with the best technology from the factory to give you the Fusion exhaust no-drone system for your C7 Corvette. This system uses the same exhaust control valve as the factory one so you can experience a nice “Dr. Jekyll” cruising sound and unleash the true “Mr. Hyde” Bullet tone when you want.

Through customer feedback and countless R&D, B&B Exhaust has shortened the muffler assembly, making the “loud” side much “louder” to give it a similar tone to the famous Billy Boat Bullet exhaust system. In other words, with the Fusion exhaust, your C7 Corvette will experience the best of both worlds. In the closed position, the exhaust note would be slightly louder than the standard Route 66 system. The Fusion exhaust is mandrel-bent from the highest-grade T304 stainless steel. It has been designed, tested, and built to stringent quality standards, boasting the finest handmade integrity in any exhaust system on the market. This one features 4-inch quad round double-wall tips.

The butterfly is controlled by a vacuum valve for non-NPP C7 models, as well as the C4, C5, and C6 Fusion exhausts which we built and developed completely in house. For C7s equipped with the NPP option, this valve is controlled by the ECU. The valve opens based on RPM and throttle position. With the factory exhaust, the tone is very quiet even with the valve open. B&B put its expertise to the test to achieve the perfect tone for your Corvette with this Fusion system. Even in the closed position, the sound is deeper, louder, and more aggressive than from the factory. When you open the valves up, prepare to turn heads as you drive and experience an increased volume and tone that will tantalize your senses.

About the Corvette C7

The seventh-generation Corvette was manufactured for the 2014 through 2019 model years. The C7 Corvette was the first to use the Chevrolet Corvette Stingray name since the C3. The inspiration behind the C7 Corvette’s design cues were borrowed from the previous C6 Corvette, i.e. the exposed headlights. However, its looks appeared to be a dramatic departure from its predecessors. The all-new C7 spotlighted a more muscular and angular front end with trapezoidal taillights that strayed from the traditional dual set of round lenses.

The first C7 Corvettes hit the market in the third quarter of 2013 for the 2014 model year. The last of them were sold in the first half of 2019. It marked the brand’s biggest change in over a decade. Power was delivered in the form of a new LT1 V8 with a 6.2-liter displacement that pushed out 455 horsepower to the ground. It was mated to either a six-speed automatic transmission or a seven-speed manual transmission. The former was replaced by an eight-speed automatic in 2015.

As the years went by, Chevrolet came to introduce more powerful models in coupe and convertible form. The new Corvette Z06 was reintroduced for the 2015 model year. It featured a new 6.2-liter supercharged V8 engine that made 650 horsepower and 650 pound-feet of torque. 2017 saw the introduction of the brand-new Grand Sport model, which combined the components and styling cues from the Z51, Z06, and the Stingray. The following year, Chevy announced the ZR1 model. Like the Z06, it was powered by a supercharged 6.2-liter V8 engine, but it produced 755 horsepower and 715 pound-feet of torque. The ZR1 was available with either a seven-speed manual transmission or an eight-speed automatic.