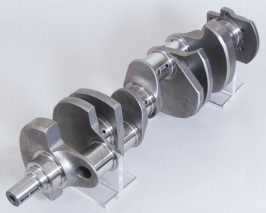 Why Should I Install a High Performance Crankshaft?

On stock engines, the crank is a component that rarely gets stressed. But in high horsepower, high-performance applications and racing, crankshafts have to be made above and beyond the OEM standards. Companies like Scat Enterprises, Eagle Specialties, Cosworth, and Tomei Crankshafts all offer an array of choices - everything for torque-happy street powerplants and show car engines to all-out race pieces.

What Crankshaft Should I Run For More Power?

For forged alloys, such as 1045 carbon steel stock cranks and 5140 and 4340 chromium-moly cranks, the total strength is significantly improved. The most popular in the high-performance world is 4340 chrome-moly and is considered to be the best in terms of nickel and chrome content. At the highest level, what you would see in most heads-up racing cars and wild power adder applications is bill 4340 steel, which is considered to be the strongest and most expensive. Billet cranks are literally carved out of a solid piece of steel.

The crankshaft that has been cut by the pendulum is one where the counterweights have been slotted to reduce weight. In the same vein, the companies offer cranks with a star flange: lightening of the back of the crank, where the contour is machined around the flexed flange bolts. To lighten the crank even further, gun drilling is an option where the crank is drilled through the center. Knife edging is another option where crank counterweights feature a sharpened end that reduces winding and weight as well.

Cryogenic treatment, for example, is a super-freezing process (-300 degrees) that modifies the microstructure (outer layer of metal) of the crank. This is also common on stock cranks, as it relives any internal stress risers in the metal. It modifies it enough that a piece that's been cryo-treated will machine differently.

Eagle Specialties offers a unique process of their cranks called ESP Armor, which is a slick finish that they claim improves power by reducing windage. Nitriding is a treatment that uses ammonia and nitrogen and intense heat to modify the carbon of the crank, again, to ensure longevity at the most intense levels of output.