The Porsche 911 GT3 is a high-performance homologation model of the Porsche 911 sports car. It is a line of high-performance models which began with the 1973 911 Carrera RS. The GT3 has had a successful racing career in the one-make national and regional Porsche Carrera Cup and GT3 Cup Challenge series, including the international Porsche Supercup supporting the FIA Formula 1 World Championship.
The “GT3” nameplate was introduced in 1999 as part of the first generation of the Porsche 996 model range as a homologation model for the car entered in the FIA GT3 cup. As with Porsche’s previous 911 RS models, the 996 GT3 was focused on racing and removing items that added unnecessary weight to the car – such as speakers, rear seats, sunroof, etc. The engine of the 996 GT3 set it apart from most of the other 996 models, although it mirrored the same basic design of the standard so-called “integrated dry sump” flat-six engine. The 996 GT3 engine is naturally aspirated, based on the unit used in the 962 and 911 GT1 race cars. Though it only boasted a respectable 355 horsepower at the time, the engineering and technology the 996 GT3 contained were ahead of its competitors. But how good did the Porsche GT3 line get?
After three decades and many variations of the GT3 later, Porsche revealed the brand-new 992 GT3 in February 2021. The 992 GT3 has the same engine as its predecessor, a 4.0-liter flat-six updated to produce roughly 503 horsepower at 8,400 rpm. The 992 GT3  impressed its fans with its incredible launching ability – allowing the car to reach 60 mph from a standstill in just 3.4 seconds. Paired with a seven-speed dual-clutch PDK transmission or a six-speed manual, the Porsche 992 GT3 is a true supercar. But even with all the new technological features and engineering improvements, we still asked ourselves – how can we make the Porsche 992 GT3 any better? And most of all, SOUND BETTER! 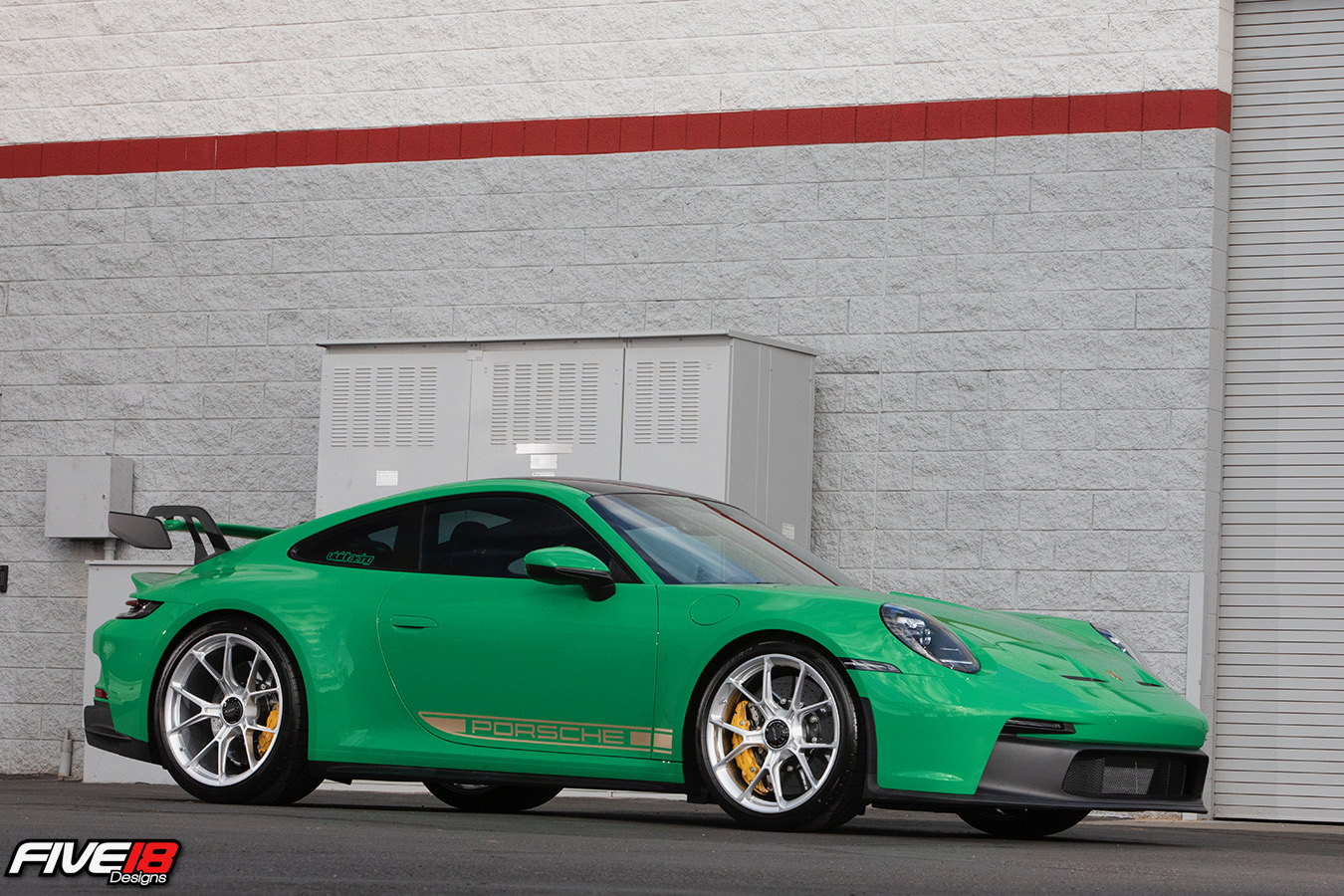 After comparing and reviewing different modifications that would be compatible with our in-house Porsche 992 GT3, we decided to install the Soul Performance exhaust system. The Soul Performance exhaust featured a header and muffler package – with long tube runners and CNC’ed merge collectors to optimize flow through the headers into a bespoke x-chamber muffler and large diameter x-pipe for a higher pitched and smoother sound. The Soul Performance exhaust also features an innovative Valvetronic system that allows the GT3 to scream during the day or quiet down once the sun sets -so that you can keep a healthy relationship with your neighbors. In summary, this system offers a more desirable sound experience with tone enhancement under all conditions. Enjoy more presence during casual driving and an aggressive wail summoned by your heavy right foot. Now let’s dive into some technical info about this particular exhaust system.

Shop the Soul Performance Exhaust System for the Porsche 992 GT3

“Replacing the heavy and restrictive factory headers is central to improving performance. By pursuing a full system replacement we can eliminate the restrictive cat assemblies, the”particulate filters”, and the giant 7 – connection point to the factory rear muffler assembly. A simple flange optimization to our previous generation GT3 Competition Headers allows us to get rid of the factory 991 gen connection point requiring costly OEM clamps and donut gaskets and utilize a more efficient v-band connection point.

Even a premier engineering masterpiece like the GT3 comes from Porsche fitted with exhaust manifolds restricted in terms of primary tubing length, runner diameter, and merge collection efficiency due to dense catalytic converters, mass production, emissions and sound restriction compromises. By refining the interface between the flange/primary tubes, using smooth radius large diameter bends, and implementing performance oriented collectors with merge spikes, we have been able to achieve increased flow, response, and performance with a more aggressive exhaust note to match. A slip on merge collector was not considered to prevent any chances of exhaust leaks. Instead we focused on designing a high flow collector from CAD to CNC for a no compromise end result. This bespoke billet collector allows for maximized runner length and the elimination of several welds in the interest of durability. Our billet CNC head flanges allow for a more efficient transition from exhaust ports into the runners and adds extra strength in a high stress area preventing the chances for any cracking from repeated, hard use during track days.”

“With limited room under the vehicle we had to craft an intricate solution and loop the exhaust to keep the cats in line after the headers to maximize exhaust velocity. A muffler proved to be the most effective way to reduce the drone level under 3k rpm enough to meet our goals for reduced cabin presence for an exciting touring level of sound.

With valves open, the exhaust is free to flow through 3″ piping and an x-pipe that merges the exhaust flow for a higher-pitched, smooth sound with maximum flow characteristics. With valves closed the exhaust is routed through secondary flow path piping and a bespoke SOUL muffler. The internal design has little to no restriction in the flow path, using straight-through perforated piping to allow exhaust gasses to escape and become muffled in the surrounding packing material of the muffler body. The muffler also incorporates an internal x-pipe to allow the exhaust flow to merge smoothly. All of these characteristics are crucial towards reducing and smoothing out the drone in the sub 3,000rpm range while enhancing the higher-pitched note we were after in both the valves closed and open conditions.

The catted/catless sections are interchangeable. You can reduce the chance of CELs with 200cell cats and tone down the exhaust if need be, or you can run the catless section to amp up the fun and performance on track. We also utilize a tip plate (same style as used on 991 GT3’s) allowing one to switch between tip assemblies/styles.”

– Soul Performance
If you’re in the market for an exhaust system that is going to wake up your 992 GT2, Soul Performance provides some great options that range from $5,795 to $9,495 USD for a complete header-back system that includes exhaust tips. You can explore all those options HERE.

How Much Does it Cost to Build the ULTIMATE HKS Toyota GR86? | The Full Build Breakdown