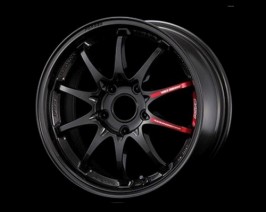 The VOLK RACING wheel brand represents the benchmark for forged sport wheels that leverage racing technology. The lightness and strength of Volk wheels have been attained by applying the latest analytic technologies.

Using the clean silhouette and lack of ostentation of its Volk Racing wheels as a weapon, Ray’s envisions to fit them on all high-performance cars throughout the world.

This is the result of Rays Engineering’s years of re-inventing their wheels making them stronger and lighter every generation. This is a testament to Volk Racing’s relentless pursuit of perfection.

The biggest change on the Club Racer II variant of the CE28 is the center section which has been modified for improved strength and weight. On top of that, the spoke cross-sectional shape, joints, and inner rim are all strengthened compared to the standard CE28. You can identify the Club Racer II from the standard CE28 by its red stickers on the triangle of the wheel.

The CE28 Club Racer Series has been developed for drivers who participate in circuit driving with factory production vehicles or one-make races and cup races. Based on the CE28N model, which features a lightweight design, we created sizes to match each technical regulation.

With the Club Racer II, we strengthened the spoke cross-sectional shape, joints, and inner rim. The greatest change was reviewing the center hole design to close the lightweight holes to inhibit the amount of disc displacement and inner rim flexibility. The effects of these changes are dramatic—comparison tests showed an actual increase of approximately 200 g over the standard model, our new model has been highly evaluated for its solid traction and stability when a load is applied upon corner entry and at high speed.

The CE28 Club Racer II will place you one step ahead of the competition. Because as we all know from Volk and Rays Engineering wheels in general, the concept is racing.