by AJ Casoli
in Random World
0

Trucks are known as the backbone of America due to their versatility and utility. Able to be taken off-road, to the grocery store, pick up the kids from school, or haul a load of gravel back to your house so you don’t have to pay the delivery fee. Trucks can fit in the fleet no matter how you look at it because they are such well-designed machines that can conquer any terrain.

Just ten years after the invention of the automobile, the truck chassis had been developed providing utility all across the world. The first truck ever released by an American manufacturer on US soil was the Ford Model T which is still a popular vehicle almost 100-years later. Although very rare, the Model T paved the way for modern trucks and assisted in the development of new technology for Americans.

Kicking off their first truck in North America, Toyota released the Stout in 1964 which was a half-ton truck chassis with a sub 100 HP engine. After a few years, it was discontinued and removed from production as their sights were set on a new chassis to appeal to the truck domestic. Upon the release of the Toyota Hilux, the American market bought them like hotcakes and was a great introduction to the market.

After many successful truck models between the ‘60s and ‘90s, Toyota had a new development up their sleeves. The Tacoma was an instant hit as it was a small and nimble truck that still could tow and haul lighter loads. The quarter-ton chassis made for a great daily commuter as it has a small footprint compared to larger trucks.

With the Tundra being a huge success in the states, Toyota went on to release the Tundra which excited Americans even more. The 4.7L V8 option that came with the Tundra gave owners the excitement and power output that other domestic trucks produced with their big V8 engines. With the half-ton chassis giving domestics a run for their money, Toyota quickly began to expand on their truck and SUV fleet.

With modern Tundra’s featuring a bigger 5.7L, manufacturers soon realized that these trucks take well to modification. Owners began off-roading the Tundra and found success as the suspension could take quite the beating and handles rough terrain like a champ. Soon after installing a few aftermarket parts, owners started realizing the Tundra’s full potential. Take a look below at our top 7 modifications you should do to your Tundra!

The first order of business when purchasing a truck is usually leveling out the natural rake. Trucks are raised in the rear to offset a load in the bed or small trailer attached. Being that many would rather a little squat with a load and have a level truck when driving under normal conditions. Most lift kits will level the truck while lifting and leveling kits will match the rear ride height to the front.

Lifting the Tundra not only levels out the ride height while raising it but the extra height allows a larger wheel and tire combination. Along with wheel clearance, there is also a significant gain in ground clearance as well to allow the truck to maneuver over tall rocks, large berms, and other obstacles that might be on the trail. Lifting the Tundra will prevent damage to the undercarriage during these situations and reduce the chances of getting stuck. 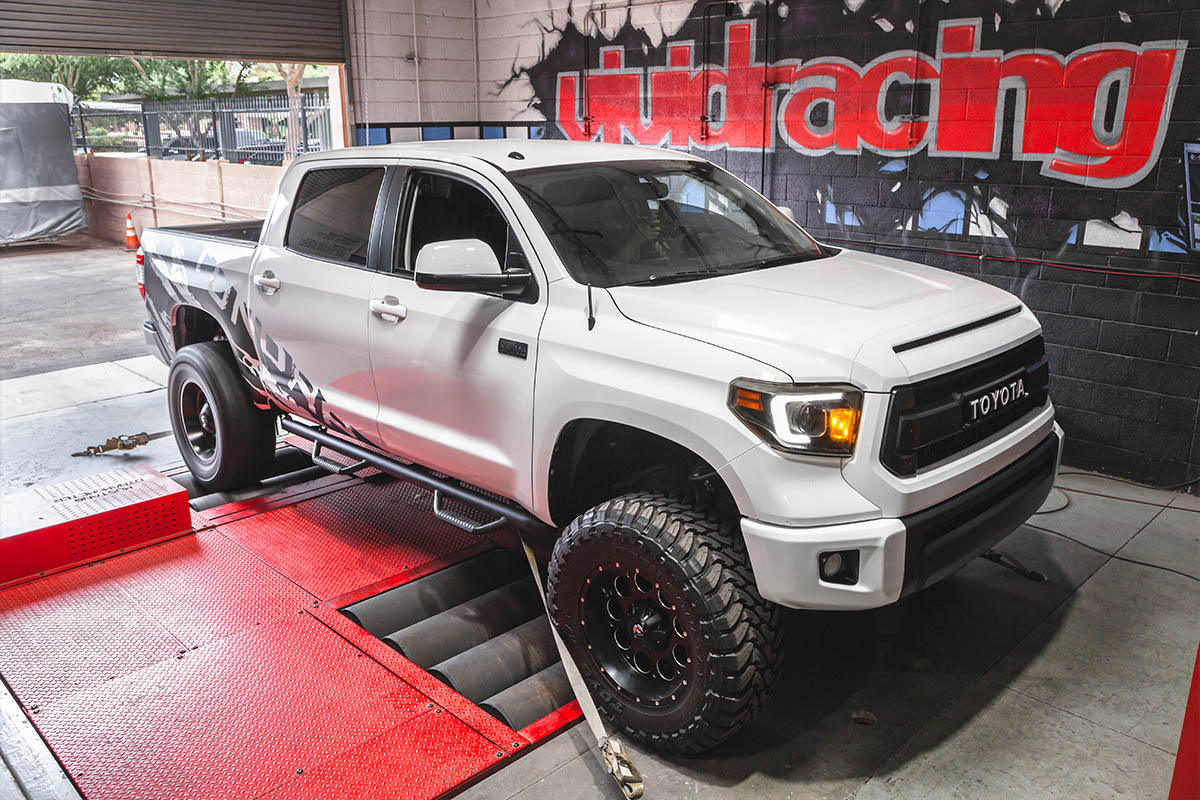 Most lift kits are a simple bolt-on solution while others offer full suspension geometry correcting components. When lifting a truck with double-wishbone suspension, the dynamic of the suspension is changed as the control arm angle is now different. A high-quality lift kit will usually feature a new set of knuckles that correct the angle of the control arms to maintain smooth ride quality.

Correcting the suspension geometry is not typically needed when leveling the front end or lifting the truck less than a few inches. When the vehicle is lifted over a couple of inches, correction is recommended to provide a quality ride as the higher you go the more rugged the suspension feels. Also included with high-quality lift kits are heavy-duty tie rods and optional shocks to improve the ride quality.

After lifting the Tundra, many owners go with a larger wheel and tire setup to better suit the wheel wells. Installing a larger set of wheels and tires not only improve the aesthetics but also provide extra ground clearance for the differential and axles. Clearing the undercarriage is one thing, but the diff and axles still hang fairly low from the factory, and one meaty sized rock could take it out and leave you stranded.

Getting the vehicle higher off the ground also gives the driver a better point of view. Being able to see further allows for dangers ahead to be visible sooner compared to sitting lower and having a vehicle in front blocking your view. With a tall wheel and tire setup, this is no issue as the height increase from the wheels alone provides a hefty difference.

Most wheel and tire combinations also provide immense grip on and off-road. Thanks to a wider wheel, a meaty tire setup can be installed giving the truck incredible grip. With some wheels offering bead locks, owners can utilize special tires that can withstand low pressures to optimize grip without de-beading the tire. A popped tire can put a stop to the fun real quick and require some assistance which isn’t always plentiful.

Learn More and View Our Selection of Tundra Wheels

Click Here To Get Tires For Your New Wheels

The 5.7L and even 4.7L V8 that was offered in the Tundra are some of the best V8 engines Toyota has produced. Following the UZ series, the 4.7L features a cast-iron block which over the years has proved its worth in durability. The cast-iron design would be ditched for an aluminum block for the 5.7L in the newer generation Tundras.

Due to the intake and overhead cam design, the performance of the Tundra seems to lack in the lower range torque band. Upon the simple installation of a cold air intake, the performance down low benefits significantly. Installing a cold air intake also reduces the intake air temperature (IAT) which results in the densest oxygen being fed to the engine.

With higher density oxygen being ingested by the engine, the power output is increased thanks to a stronger burn inside the engine. Reducing the IAT also prevents ping or knocking within the engine which could be catastrophic to the Tundra over time. Providing a stronger burn also results in improved gas mileage as the engine doesn’t have to work as hard to during the combustion stroke.

Upon installing a cold air intake, owners can enjoy an aggressive induction noise as the throttle body opens to let air into the engine. This aggressive tone allows owners to hear their engine at work and gives a more thrilling experience behind the wheel. The installation process of a cold air intake is simple and offers many benefits no matter the engine configuration in your Tundra.

Hearing the beefy V8 is sometimes the main selling point for the consumer. Being that the Tundra took off due to its robust construction and big burly sounding V8, many owners feel the exhaust system should have been better suited. Unfortunately, due to EPA regulations and the number of sales, Toyota, and many other vehicle manufacturers, had to put highly restrictive exhaust systems on their vehicles to pass strict regulations.

Since it is not the early 2000’s anymore, owners can install aftermarket exhausts without these regulations being an issue. Installing an aftermarket exhaust will improve the sound quality of the Tundra while also letting it breathe for the first time. Paired with a cold air intake, an exhaust system can drastically improve the performance of the Tundra as more air is delivered to the engine.

Installing an intake with a stock exhaust renders the intake virtually useless. As the increased air exits the engine the factory exhaust creates a bottleneck in the airflow. Due to this bottleneck in the factory exhaust, performance suffers and the engine can’t operate to its max potential. Simply installing an exhaust system can significantly increase the thrill of driving your Tundra as you hear the engine screaming through the RPMs.

Most aftermarket exhaust systems consist of 304 stainless steel construction to provide incredible quality and sound tonality. Simple installation makes this upgrade easy to do at home while offering phenomenal performance increase, especially when paired with cold air intake to truly maximize the beefy sound of the V8 under the hood of the Tundra.

Tuning the Tundra is made simple with VR Tuned, either send in your ECU or purchase one of our optional OBD II tuning modules. With the included tuning module, owners can flash their ECU at a moments notice then flashback to stock before a dealer visit. Toyota does NOT use flash counters during standard vehicle checkups allowing this tune to fly under the radar. For those that might not know what all tuning does, there are many benefits other than increased power with a VR Tuned ECU flash. 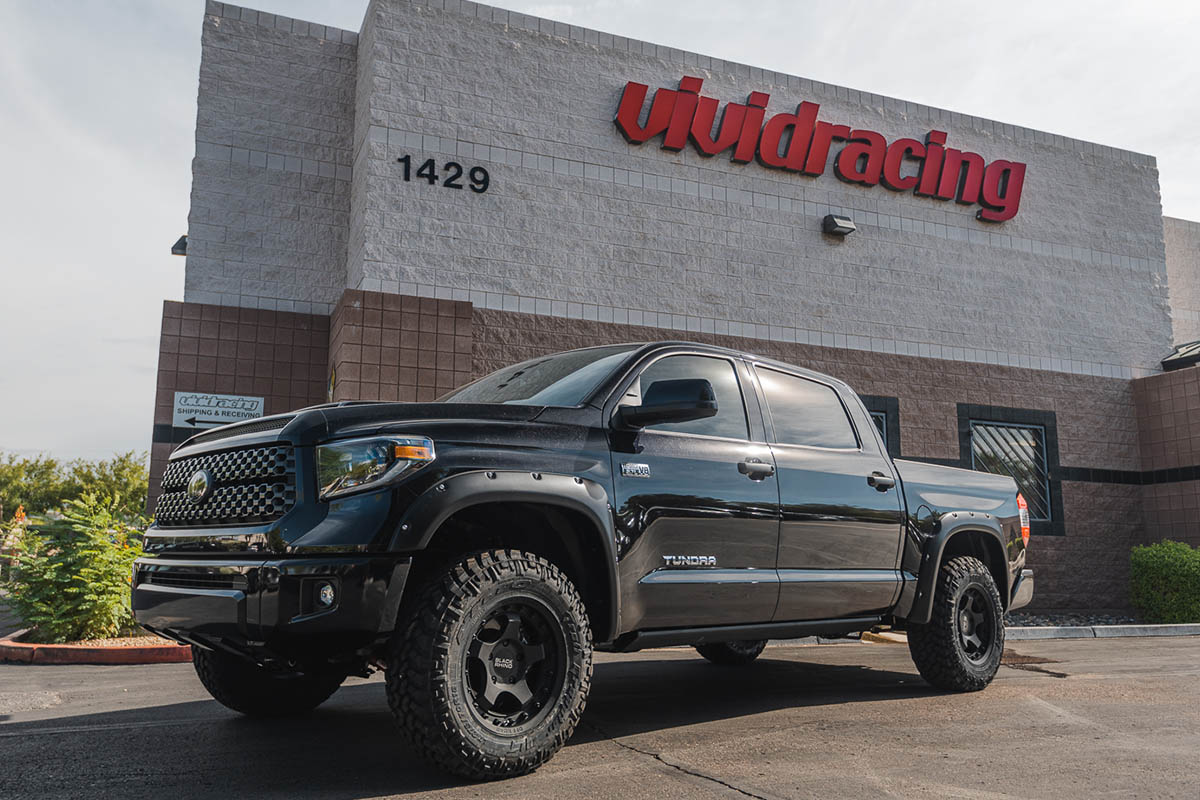 Throttle response is significantly increased after the ECU flash, as the throttle is controlled by an electronic butterfly valve and a signal from the pedal. Improving the throttle response was achieved thanks to the bump in the signal from the tune which eliminates the ramping effect when the butterfly valve opens. After a VR Tuned ECU flash, the valve opens as soon as your foot hits the ground.

Auto-adjusting mapping and fuel trims allow the ECU to adapt to different octane ratings while efficiently delivering power to the pavement. When adding other aftermarket components like an intake or exhaust the tune will adjust accordingly to maximize power through the installed parts. On top of the other amazing benefits, the VR Tuned ECU flash provides an increase of 19 HP and 19 lbs/ft of torque.

Learn More and Purchase Your VR Tuned ECU Flash Here! Or Email Tuning@vividracing.com For Any Questions