TODA Racing high compression forged piston kits come complete with forged pistons, piston rings, C-clips, and heavy duty wrist pins. The basic form of the piston is an elliptical barrel. This forms the basis from which each part is subjected to high loads and measured for thermal expansion to accuracy of 1/1000(mm). The top edge of the piston uses a castellation design to reduce sticking, improve lubrication and sealing. The design also acts as a scuff-band to reduce run in time. TODA piston also feature improved oil drainage with redesigned oil channels. Improved oil drainage reduces piston weight during engine operations which is ideal for high rpm use. TODA pistons are produced in house using a 3000 ton press and come fully balanced within 0.25 grams of each other. 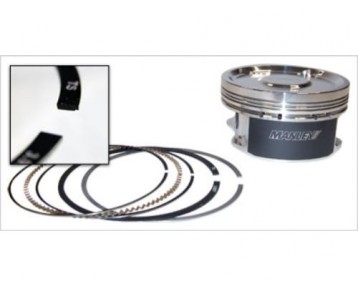